World War III Reference Prophecy Was Never in The Bibles of my day.

The only third world war at hand is the war against humanity.  Don’t get caught with your pants down.

There was no prophecy of a 3rd world war in bibles.   However a short victorious battle known as Armageddon is prophesied.

The Puppets are the actors on the image of the beast (TV) pretending to be important politicians.  They are actors.  ACTORS.  Biden is an actor portraying a silly forgetful old man.  All that shows on the TV is choreography for your reaction.   Truthers say they know this and in the same breath they swallow ever word.  It’s baffling to watch.  The many do not know their own heart.  Or they would know the imbedded allegiance they hold in their hearts for the image.  We cannot deprogram if we don’t know & cannot admit how deeply we are programed.  A man must go back to his youth to understand why he is who he is now.

Back to the cartoons that comforted.  Back to the shows he Loved.  This device is not called The Image of The Beast for no reason.  So many Christians cannot, won’t go there.  They are too emotionally attached to it to admit the betrayal they are suffering by the TV animal & phone beast.

TRAPPED ON THE HIGHWAY TO HELL 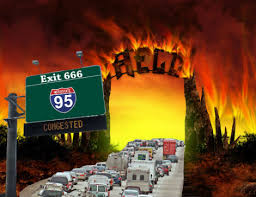 The pandemic story time was a prelude to the up & coming world war story time.  With all nations marching to one drum beat they won’t blow up the Earth their children & bloodlines inhabit.

However are we to believe the elite are that stupid?  I am not so sure nukes even exist.  It’s a picture show on the image of the beast that has been programming me & you to believe they have weapons of mass suicide & have for years.  And will use them to their own demise.

Why the F would I believe Evil incarnate the image of the beast?  I don’t.

Why won’t Christians admit that the TV and phones are the image of the beast when its so obvious.  And if you believe, OBEY, and have Faith in it that’s worship.

Let yourself off the hook human.  You were set in front of the TV for years on end by those who you trusted most.  Its comforts us, does it not?  Its okay. Turning from the image isn’t an easy change and God knows your plight.

If a man cannot know his own heart how will he go before God & confess Truth?

The Image of The Beast Lies Don’t Trust Them

EXPECT a nuclear war story time.  You might  even hear some bombs going of from afar.  They will show you world war, panic, & death on the TV.  It will likely be the biggest TV Con yet.  No telling what the beast will get humans to participate in with the threat of death looming day in and day out.

Don’t take the mark that makes men into beasts. Don’t believe anything you have not seen with your own eyes first hand in real time.  Consider also holograms may appear.

Don’t get caught on the highway to hell with hundreds of thousands of people backed up with no food or water.  I had a vision of that scenario.  Millions stuck on highways running for safety.

Just like when they try to get all Floridians to hit the roads during hurricanes to enrich their economy.  Don’t fall for it.

Then they zap us all with emf from their invisible weaponry on the highways to hell.  If the image says run…then don’t.

“My spirit shall not always strive with man.” Genesis 6:3.