Hear, See, Speak No Evil, being ‘negative’ is unkool according to status quo law.  Just as being a victim is unkool that way no one can see the assailant.

Satan roams to and fro on the Earth seeking whom he may DEVOUR.  “My people are destroyed all the day for lack of knowledge.” 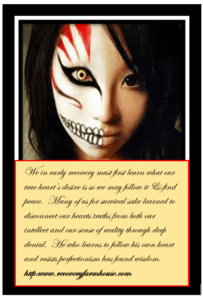 Wearing a toxic and air obstructing mask that heats up the entire body making one more susceptible to illness due to the increases in body temperature blatantly are showing their allegiance to the beast system by obeying the TV with gullible submission.

I have done the research on what masks do to the human body and its not good see here.

Today in real life I went to a local grocery store.  Seems all the elite organic food stores closed down just before the CV financial crash as if they didn’t need clean food anymore because all the elite have submerged into their bunkers.  That is the feeling I get after both “Lucky’s” and all “Earth Fare” high quality food stores closed.

I Met a Woman Wearing a Mask

I was in a local food store that caters to vegetarians by selling many organic vegetables.  The Alachua County FL legal system sent Ward’s a letter in Nazi totalitarian fashion making them adhere to new draconian style laws.  Wards was instructed to have an employee sit at the front door of the store entrance throttling entrance to the store.

Also they were instructed to draw lines on the floor, for people to stand on as if waiting for some insane ride at Disney World.  The county has appointed all stores to police the numbers of people entering the store only allowing a certain number in at a time by new Nazi style controlism laws that further humiliate and belittle Americans under false pretense.

The Nazi rulers are finding out who is and isn’t loyal to the beast system and its draconian measures. The compliant are easily identified by the mask on their face taking no heed to how that mask is affecting their health.  I can only image what people acted like in Germany during the holocaust and the division of those who saw and those who served Hitler’s agenda.

Division caused by the Right Left Political paradigm has nothing on the division being created by the Karachi V. by its  social distance mind games of masks & fear.

Jazweeh the predictionist stated she feels strongly that the separation of the sheep from the goats is being taken to another level by the behaviors and reactions over this C.V.   In most instances you won’t see the children of God wearing masks because the children of God are not normally deceived.(granted there are exceptions to the rule). The wearing of the mask speaks volumes to the emotional and mental condition of the wearer.

Mainly the wearer is skipping to the beat of the pied piper like rats lead to the slaughter.  Programmed by their own wifi. 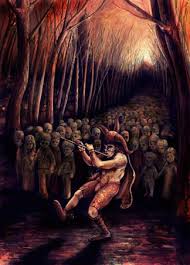 If that wasn’t enough I spoke with a woman who was suffering inside with a toxic mask on her face full of fibers drying out her lungs and heating up her entire body (its no wonder she was emotionally unfit for conversation).  “Do you know anyone personally who is sick”.  “Oh yes I know 4 people who have died”! She answered abruptly and with a defensive tone.

She God Very Angry During Our Discussion

Hmm I said ….”what were their symptoms”, I asked.  She said the usual “fever, unable to breath”. I asked “how do you know these victims?”   “Well they are in England friends of friends of people I know online……” (basically people she doesn’t know 3,000 miles away going on here-say).  I told her “that isn’t first hand information nor is it factual proof of anyone being sick and dying.”

Again I must point out, my opinion doesn’t infer that people are not going to die in droves due to something lethal. I do not dispute the diabolical ways of the beast system who have taught me very well just what they are capable of.

Until a man sees his own programming and trauma induced by the beast system he cannot overcome the system’s cunning downloads.  Downloads of false identity induced by childhood demoralization and trauma based programming. We simply must reach our own emotional “singularity” to see what we have endured at the hand of the system.

The Masses are controlled by their emotional condition

Furthermore most have been abused by those they trust and Love most due to their loved one’s thorough relentless programming of crime and punishment aimed toward all “educated” children.

Also the beast must be revealed to us by God Himself so we may then understand why our emotional coping knee jerk reactions are built upon the cracked foundation of emotional denial systems.  In English?  If we are emotionally triggered we go into either defense mode or we just lie to ourselves for comfort sake.  All men must come to know their emotional patterns lest we stay in self deceived and comfortable DENIAL.

Why are People so Defensive?

People are programmed to believe they are “bad & wrong”.  This my friends is how the beast controls us by fear and oppression.  First the demoralization and then the MASK (to become someone accepted by the status quos we crush our own hearts voice and fall in line behaviorally.  Hence the pretend identity mask and now the literal MASK.