By Laura Edgar author of Paradise for the hellbound

“And in those days men shall fear that which is on high.  And the souls of men shall return to God who gave them”  Ecclesiastes (pre M.E.)

“Love is kind, never selfish, Love is without end, it is not petty nor does it devise evil, Love never fails.”   1st Corinthians 13 (post and pre M.E.)

If you have not noticed in the last 3-4 years 2017-2021 that the sun is now white hot too bright to watch set then either you don’t want to see changes in the Earth or you have the locust sucking on your brain.

Whoops broke into song…so sorry for that.

I used to think the Mandela effect was somehow directly tied to the presence of the creature.  But now it seem some see the Mandela effects who have the creature.  The locust is however directly tied to the supernatural bible changes and the mark of the beast on the forehead.  Meaning every Christian I have seen who have the mark of the beast on the forehead also have the locust.  They also do not remember the KJVB when it was Holy and how it was written.  They cannot see that it is now vile, putrid, portraying a hater god with a hater Jesus who by the way wears a golden girdle.  To see the bible changes go here to “bible change log”.

Christians Who See Some of the Super Natural Bible Changes (SNBC)

Please, fear not.  If you never knew the bible to begin with how will you know its been dramatically changed?  You do not have the right to condemn yourself.

Some Christians for instance like “J F C G” on YT will display 2 or 10 new commonly seen supernatural bible changes and claim he sees them all.

He points out the obvious changes that are already all over the internet and well known.  Changes like “the wolf now lies with the lamb”, and the “wineskins” changed to “bottles”.  Then happly (to him) in the next breath he will quote with no memory or understanding of what evil is and what was in the books just 4 years prior, scriptural blasphemy, some of the most vile and putrid s.n. changes in the book holding the wolf written words to his heart preferring the lies over Truth.

This is what we see.  We can’t help that the majority of Christians seem to be losing not only their memories of the bible but also the tree of the knowledge of good and evil so they don’t recognize the bible is vile.  They don’t remember what honorable Old English is and was.  Oh how I loved the honorable KJVB Old English dialect with it’s poetic rhythm.  I too mistakenly called the books “The Word of God” which it NEVER WAS.  It was however many inspired WORDS of God.

Put it this way, those who see the S.N.B.C can probably also see the mark of the beast on foreheads of mankind.  They see at length like EYA Report on YT for instance who sees thousands of changes, new words, new language, new precepts contrary to God, blasphemy, ridiculousness, and words like “stupid, piss, dumb ass” etc. all over the bibles that were not there years prior.   She doesn’t just say “oh the bottles changed from wine skins.”  She also shows blasphemy and evil all over the bibles in their true light.  She remembers what good and evil is and doesn’t worship the bible as if it were God.  (“Let the reader understand” the abomination of desolation has to do with reading.)

I have written so many articles on the S.N.B.C.

JFCG stands with the mind set “don’t throw the baby out with the bathwater” as he only sees very few changes and knows not the precepts of God.

By “creature” I mean the prophesied, locust from the pit that some of us can see on the heads of men and we are usually compelled to draw at some point. 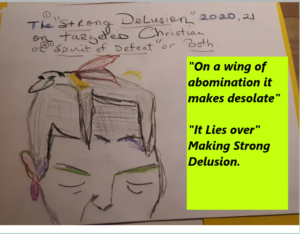 Some see it lying beside a dead sheep and have drawn it as such.  See Jonathan Klecks video “A smile from a vail” with it’s horrifying confirmation of the locust.  Someone sent him the drawing of a very similar locust vision with a dead sheep on his head lying next to the raptor/locust.  I compressed this vid.  You can see it on his channel The Jonathan Kleck

What does this mean for Jonathan?  There’s a good chance the saved by Faith will be delivered from the raptor at some point.  There is no denying for me that Kleck is posting Truth given by some spiritual avenue likely The Holy Spirit.  None of us are perfect.  I myself have experienced deliverance from dark spirits a time or two in Jesus name.  That is the only way I have been able to expel them from either looming at my head or deliverance of internal demons.

Hell yes this demon thing is scary. Put on the armor of God. The go-to emotional survival skill is denial.  People don’t pray for demons to leave unless they have been born again and changed or unless the demonic is causing the person pain or problems.  Other wise people can live near normal lives toting around dark entities of their choice.

How do they enter?  The person opens the door for entry.  I once was posessed with a horrid spirit of fear so bad that (while injecting Cocaine) that after literally hiding in a closet from a knock on the door for the next 3 years I suffered from anxiety attacks, panic stricken attacks, anxiety from hell all after being born again.  That’s right I was born again in Jesus.  That’s why I know spirits can come in if we open the door.  Obviously I used drugs to open the door.

I was delivered later by the laying on of hands and prayer by a preacher and four other members of a small Baptist church who all have the Holy Spirit and prayed over me in other languages of intricate dialect. Not baby sounds mind you.  Do you know anyone who has been delivered from intense Cocaine induced spiritual trauma by panic and anxiety attacks?  Well you do now.  Kinda.  I never had another anxiety attack.  I no longer walked in intense fear.

Thank you Jesus!  It’s all in my book Paradise for the Hellbound

God’s chosen few not only come out of great tribulation but they also know what a prodigal son walk is like.  Therefore they see the depths of God’s Love and Grace for them.  It’s a hard lesson that should never be forgotten.  “He who sins much Loves much”.

My last deliverance came at a time I feared addiction relapse.  At that time I asked Jesus to save me from myself.  One of my best prayers ever spoken to Him.  Jesus said this, “because you have asked, I will even deliver you from yourself”.

We see many signs and wonders.  The locust scares us we had to work through its threat.  I myself had the locust attack me in my sleep at which time I literally ripped it from the side of my face tearing it limb from limb by what I call visualization.  Father told me those who take the back scene will never be delivered from the locust from the pit.  Do not take the back scene it is the mark because it changes the structure of your strands by Jeans directions, instructions.  Why are they doing this now?    Because they finally got the golden key to your cells nuclei.  They unlocked the lock by finding the key with quantum computers that work out such mysteries in hyperspeed.

2018 Jazweeh asked God How Will I Know The Mark of The Beast?

God answered Jazweeh audibly-“The mark of the beast will be attached to the name Zebra in some direct way”.  She immediately looked online and found Zebra tech.  They make RFID chips.  We thought the mark would be a chip.  Then in 2021 an article hit the news stands, “Zebra tech plays key role in rolling out the back scenes with their temperature gauge packaging and transport”.  All of the first roll out brand was delivered by Zebra Tech as they had the packaging to keep the back scene chilled.  Never before have I gotten such an audible word from God as that night, said Jazweeh, when He said “Zebra”.

The mark takes time to change the strands of those who took it.  They will likely be turned into some kind of half techno half human beasts.  You see CRISPR technology was a splice and edit where they had to cut the strands.  The “M” stands for messenger.   They did this because they didn’t have the golden key.  Now they do.