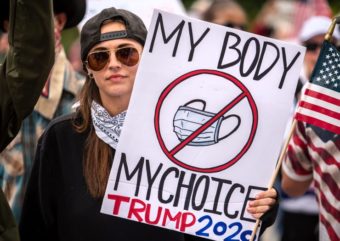 What are My Rights and Why are They Being Trampled?

The Constitution of The United States of America

Congress shall make no law respecting an establishment of religion, or prohibiting the free exercise thereof; or abridging the freedom of speech, or of the press; or the right of the people peaceably to assemble, and to petition the Government for a redress of grievances.

You also have the right of choice and to make decisions concerning your body.

The propagandists are saying the abortion law doesn’t apply to masks.  How about this??   There was a time in history when the poor & lower class ignoble’s of no good bloodline according to the tyrany of the times were efficiently put in their place.  There were no lower class infidels allowed to wear Gold and Purple array…after all these colors are meant for the rulers and high class.

Laws Over What Clothing You Can Wear

Apparently  these “Sumptuary Laws” as they once labeled them are being revived today, here in the United States and all around the world.  By the common man of “mean condition” complying to a masked face they are literally bowing to the corporate tyrannical un-elected DICTATORS.

Majority may be following the mainstream lies but they do not rule my behavior, thoughts, opinions, or any other aspect of my life.  For that matter the U.S. Government has FAILED and therefore must be removed from puppet power.

PERHAPS THE U.S. GOVERNMENT SHOULD BE FIRED.

Sorry U.S. Govern-ment. YOU BLEW IT when you sold out the American people and made laws to oppress and lie to us!  You NEVER should have trampled the constitution under any circumstance.

Perhaps they should turn over all military to the people who pay taxes and hired them to begin with.  And turn over all products, devices, spyware, assets, land, money, homes back to the American People.  There are millions of people who need their [donated to Government] land to begin family farming.

After all food producers have been POISONING OUR FOOD w/pesticides, non food chemicals, and preservatives, artificial colors and  toxins FOR YEARS ON END with no objection from the hired gov..

U.S. Gov.  You absolutely have shown us who you are by your actions toward us.

Yes it was bad enough being dept slaves all of our lives and not realizing we were slaves to banksters who would NEVER let us get ahead.  The system is rigged.  “The American Dream”…you must be asleep to experience it.

Separation of the Goats from the Sheep

But now the powers fear greatly.  God has separated the goats from the sheep and so too Satan must conduct his own separation of those who comply and serve him and those who do not.

I have two recovery from addictions websites.  I used to write posts about AA and other 12 step recovery issues and post the articles of https://recoveryfarmhouse.net & .com in recovery topic facebook groups.

Division, masks, and unjust distancing laws lower the Love vibration in the land.

By the behavior of the people in those groups I got a clue of what society was turning into on an international scale.  The rules of society are now run by ego affecting and fear based rules.

Truth Has Fallen Prey to those Who Love the Lie

Truth is no longer the guidepost of our society.  Lies are now in charge.  THIS is why the True children of God are outraged in their spirit.  Those who Love The Truth know that what society has become is wrong.  Love is nowhere to be found online.  Oh sure there are lots of “I Love You’s” being thrown around for posterity sake.

Love is an action of giving that is an act of kindness toward our fellow man.  Love vibrate throughout the Earth.  Help and guidance, assurance and encouragement, uplifting support and the gift of sharing Faith, Hope, Love and blessings cannot be done online except, yes to a point but online giving lacks the human touch of interaction that is vital for Love to flourish in the land.  Division, masks, and unjust distancing laws lower the Love vibration in the land.

Perhaps this is why the apparently Satanic Dictators made the six feet under law, I mean 6 ft apart law.  That our interaction of Love can be quelled by Satan and his power may increase when hate increases.

Hate will not prevail.  The Gates of Hell Shall Not Prevail Against The Children of God!